In 2021, Matt Orum, Senior Operations Manager at Pontoon, represented Pontoon and the Adecco Group as a Win4Youth Ambassador in Lanzarote. Shortly after he returned home, he learned of the passing of his close friend and fellow Pontoon colleague Megan Armstrong who had lost her battle with breast cancer.

On Sunday, February 7, Matt will be running the DONNA Marathon in honour of Megan. The DONNA Foundation is a private non-profit organisation that provides financial assistance and support across the US to those living with breast cancer and funds groundbreaking research.

Today, on World Cancer Day, Matt shares with us his passion for this cause and his journey to competing in this inspiring event.

“I had not planned on transitioning from newly indoctrinated triathlete to marathon runner in training on my arrival back to the States after the Win4Youth event.   When I got home, my wife and I were driving to Target when I received a call telling me that Megan had succumbed to her battle with breast cancer.   It was and is heartbreaking.  The DONNA Foundation has been hosting the marathon in Jacksonville for a number of years, so I was aware of the event and the great cause it serves. At that moment in the car, I knew I wanted to use the great shape I was in and complete the marathon in Megan’s memory.

The week prior when I was in Lanzarote, Megan and I had been exchanging texts. I was sending her photos of a cat in the hotel who looked like her cat, Luca and of me and a fellow W4Y Ambassador who had previously worked with Megan. When he learned I was with Pontoon, he said, “hey do you know Megan Armstrong?”  I loved it.  If you knew Megan, you knew she was the kind of person who connected dots across continents.

The following day, I sent her a picture of me at the finish line, telling her it could be her next year. I did not receive a response.  I now know that Megan was in the hospital the whole time we exchanged texts. I like to think she was happy that I had finished and didn’t want to tell me it would not be possible for her to do the race the next year.

When Megan’s obituary was posted, I called my friend Amanda and vented about how much I hated cancer.  Amanda is the Executive Director of the DONNA Marathon, and I knew she would be a good person to lean into for strength.   She thanked me for telling her Megan was a friend and making the connection as the foundation had started to see incoming donations that morning in Megan’s name. It was good for the staff at the DONNA to connect to the story behind the donations.   I told her I would be running this year for Megan and would appreciate her tips on condensing training for the marathon into the time I had left before February.  After we spoke, I went to tell my wife Amy of my decision.  Amy told me she already knew I was going to do it, handed me my training schedule, and told me I was behind a few weeks, but I would be fine!

I will be out there thinking of Megan as I run the race.  I hated the running part of the triathlon and I never thought I would be here today, 2 days away from completing a marathon.  But here I am. Win4Youth has changed my life.”

If you would like to support Matt, you can sponsor him here. 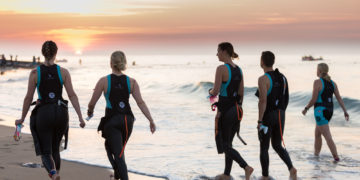 Win4Youth: Highlights from Female Ambassadors
Win4Youth is an Adecco Group initiative to unite people through sport while simultaneously raising money for youth charities around the world. Running since 2010, it is a once in a ...
X